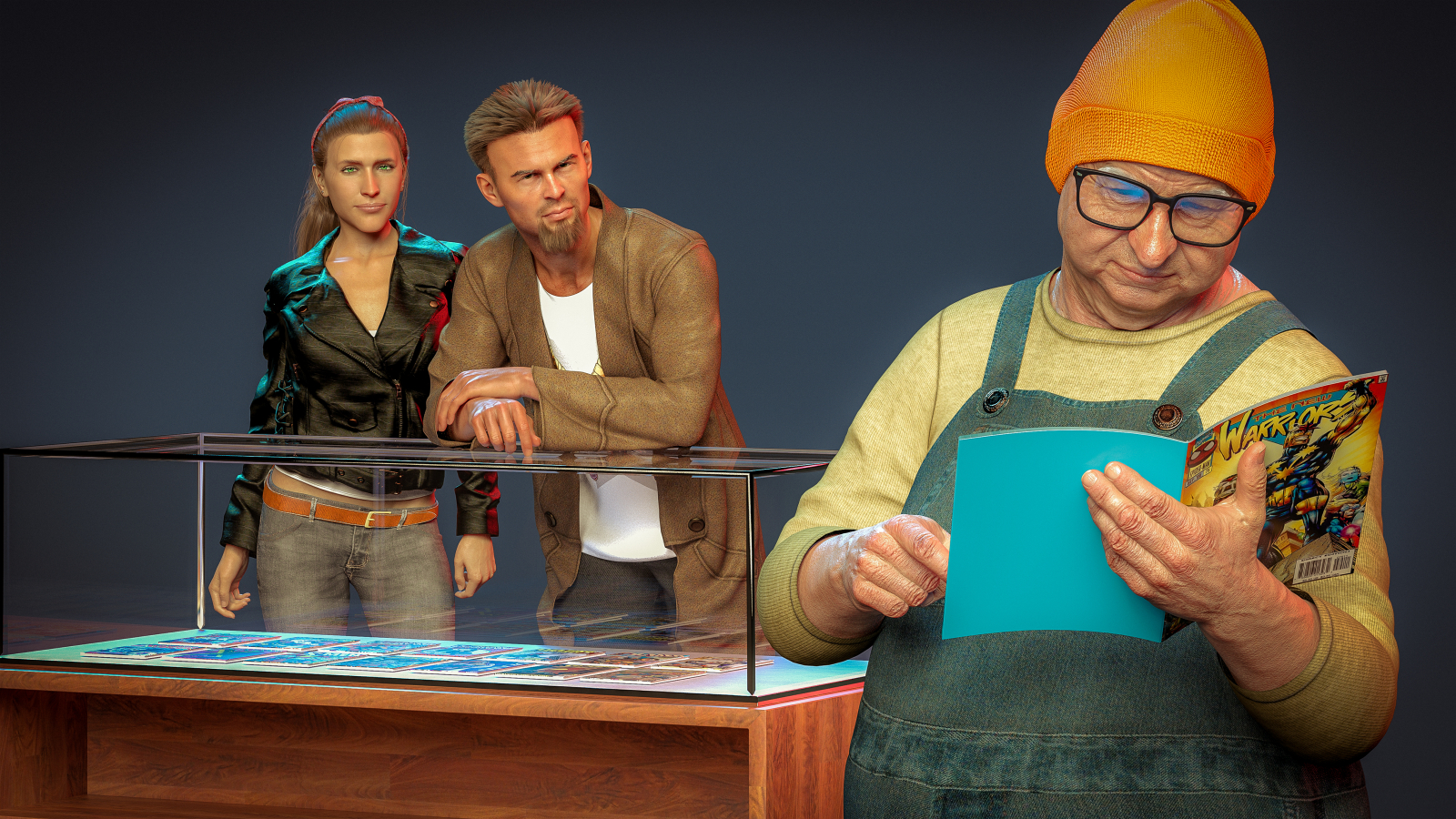 Eddie stood in front of his comic book store, his trench coat scarfed about him, and watched through the big picture window as Ashley rung up her last customer. The boy she was waiting on stood eye-level with her chest and was grinning ear to ear as she, seemingly oblivious—but not oblivious at all, Eddie knew, not at all—counted out his change. Outside, Eddie found himself grinning too.

This was why he employed only girls to run his register. Selling comics was about selling fantasy, and not just the fantasy of the comics themselves, but the fantasy that at least part of that fantasy wasn’t really a fantasy at all. A hot girl behind the counter of the local funny book shop? And one who let you stare at her tits without a reprimand? That wasn’t supposed to happen in real life. And yet, here she was.

Eddie slipped into the shop as the customer slipped out, and he gave Ashley a nod in greeting as he stepped behind the counter to join her. Then he started in on emptying his pockets. First came his wallet—empty now, except for a maxed-out MasterCard, an expired Massachusetts driver’s license, and a half dozen receipts. Next came his worn spiral-bound notebook, the one meant for figuring the store’s finances, but which had become his doodle pad. And then, finally, came a broken padlock.

“I don’t know,” said Eddie. “Probably. I didn’t bother to hoist the door once I saw the lock.”

Ashley nodded, then crouched down to retrieve something from the small fridge they kept behind the counter.

“You get my dinner?” asked Eddie.

Ashley nodded again, setting in front of him a chilled bottle of chocolate milk and an eighty-nine cent package of Hostess Donettes.

“You know,” said Ashley, “you could splurge once in a while. This hunger strike you’ve been on since she left—”

“Not really a hunger strike,” said Eddie, cutting her off as he popped one of the miniature donuts into his mouth.

“Well, whatever this is,” said Ashley, “it needs to stop. You’ve got the money to treat yourself better.”

Eddie shook his head, then reached into the inside pocket of his coat. He set the folded letter down in front of her, nodded at her to read it, and then waited.

When she was finished, she looked up at him with weary eyes, eyes sadder than her eighteen years entitled her to. “How?” said Ashley. “Are you really that far behind?”

“But we do better business than Hot Comix and Greg’s combined,” she said. “What the hell am I doing wearing this low-cut shit all the time if not to keep the store in the black?”

Eddie shrugged, then stepped away from her. At the window, he stood and watched the traffic backing up along Alpine Lane, cars waiting to turn left or right to join the hustle and bustle of the main drag. The automobiles speeding along Chelmsford Street seemed united against those lined up on Alpine, and Eddie enjoyed watching soccer moms stuck in front of his store growing aggravated. He watched them clutch their steering wheels tighter, watched the swears form on their lips as they looked to their backseats to make sure their children were asleep. They cursed the town that would not install a traffic light here, despite this little side street being home to not only the post office but the best bakery around. But Eddie, he loved it when cars jammed up right outside his door. It’s why he did better business than the guys across the street: if traffic was backed up bad enough, kids dragged along with their moms on errands needed only to peer out to the right, point at the sign for The Splash Page, and say, “Mom! Please?!?”

Behind him, Ashley was apologizing about something as she gathered up her things.

“Don’t worry about it,” said Eddie.

“Somebody’s got to worry about it,” said Ashley.

Eddie turned around to face her. “That somebody ain’t you,” he said. “At least not anymore. You and your chest have done your duty for king and country. And now you’re free to peddle your wares—”

“And to wear only petals,” she said.

He snorted back a laugh. “That’s right,” he said. “Over at Mac’s, the guys’ll be lining up for you now, not Superman. And you’ll finally be getting the money that you deserve.”

“You’ve always paid me what I—”

He set a hand on her shoulder and she stopped talking. “It ain’t your problem, Ash. Okay?”

But she said nothing. Instead, she reached up with her own hand and squeezed his.

They stood in silence for a moment before Ashley asked “What’s happening to the money?” She ran her free hand along the top of the glass display cases that formed their counter. “You’ve sold so many of the big ticket books. You should be all set,” she said. “I mean, that’s part of why I’m leaving. I thought you were all set.”

Ashley held up the letter he’d given her.

He stalked away from her like it was kryptonite.

“You’re being evicted,” she said. “You are not going to be fine. Where are you going to go? I mean, this isn’t just your shop now.” She pointed to the table of long boxes which occupied the center of the store, to the skirt of the burlap tablecloth. “You’ve been sleeping under the Goddamn table too, ever since Alice went back to her dad’s.”

Eddie grabbed Ashley’s leather jacket from the coat stand and tossed it at her. Then he said, “Don’t worry about me, kid.”

“Fine,” she said, putting on the jacket. But just as soon as she’d put it on, she was taking it off again.

Ashley pointed over his shoulder toward the window. “The Talker,” she said. “He’s coming.”

Eddie turned around and squinted. Then he sighed. Sure enough, there was the old bastard now, making his way past Skip’s Restaurant, his unmistakable orange wool cap bobbing up and down as he waddled this way.