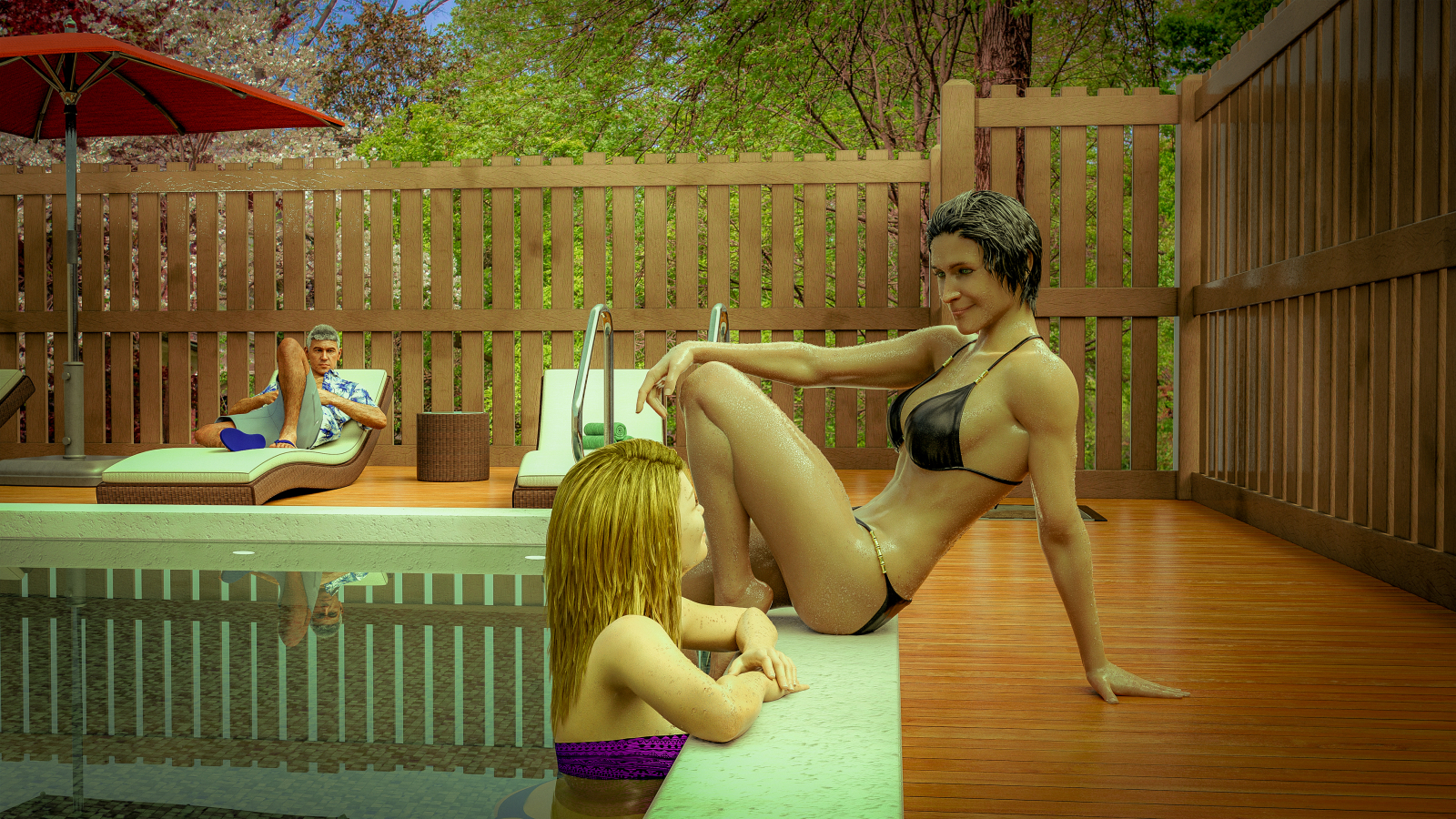 Too Much Fabric, Too Much Color 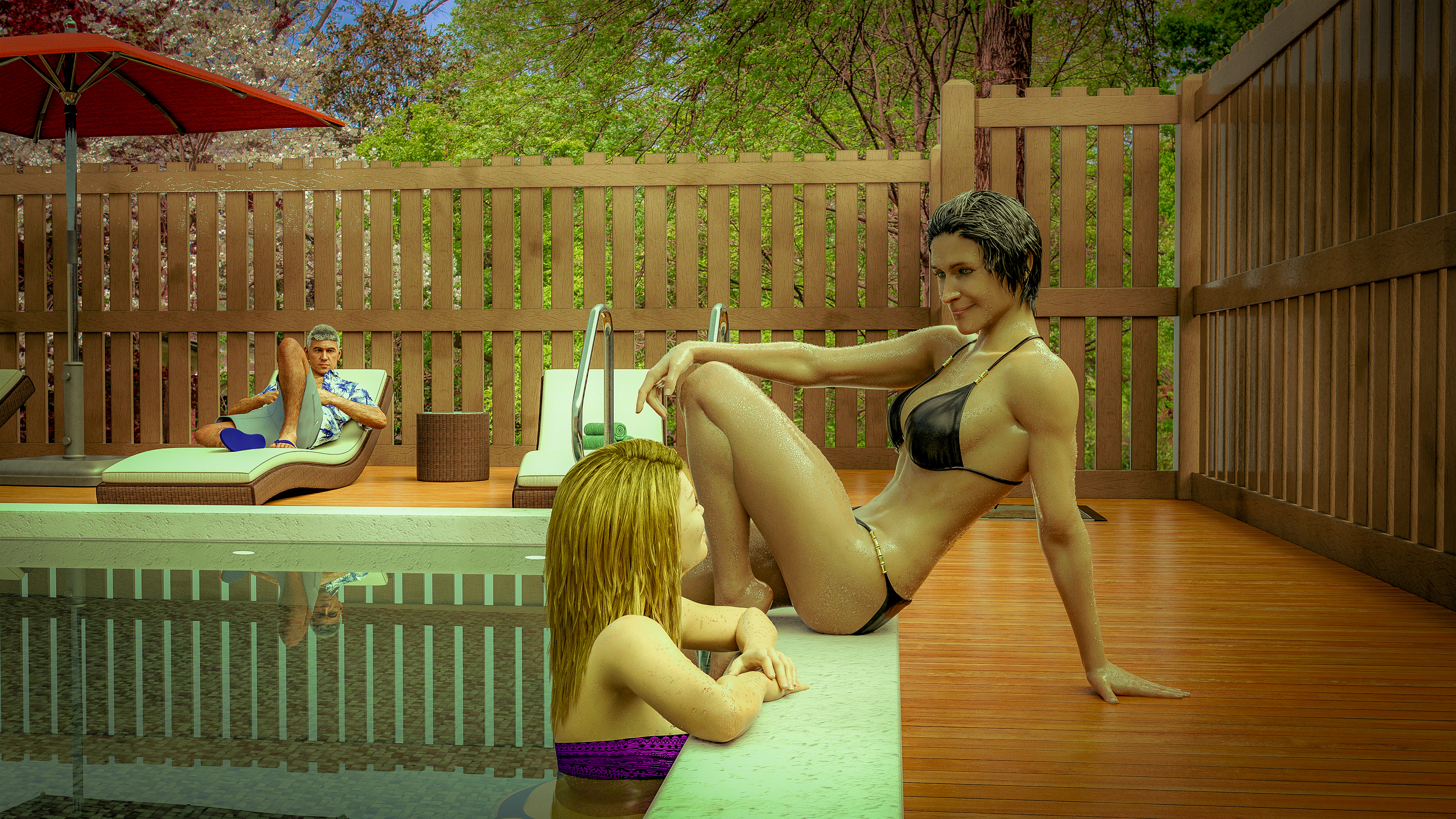 He sits on the edge of his daughter’s bed and stares out the window at the distant pond where he used to skinny-dip with her mother. Oh, the fun they used to have. Down there. Up here. Up here, in this very room, back when it was his.

With his big toe, he traces the contour of a deep knot in the old hardwood floor. Pam scratched her ass up on this very spot, once upon a time. What a fucking mess. She bled so much that, when they were done, he accused her of being on the rag without telling him. Truth be told, she told him, she hadn’t even noticed the wound until the end. He’d been hitting the spot so good, it was like the whole damned world had disappeared.

His other foot catches on something as he slides it absentmindedly across the floor, and he stops what he’s doing to see what he’s found. He pinches the piece of fabric between his toes and hoists it upward, his knee and hip creaking in protest at his middle-aged attempt at flexibility.

It’s a bikini bottom, he sees now. He runs his fingers along the synthetic fabric, dust flaking off of the forgotten thing, and he wonders whether it belongs to Alice. Belonged, he corrects himself, now that he’s kicked her out and she’s left it behind. It’s his now, he supposes, like every other scrap in his now empty nest. But whose was it? Old Occam would say it was Alice’s for sure—all things being equal, the simplest solution is the right one—but Alice had so many girlfriends up here over the years. It could just as easily have belonged to one of them.

Truth is, this was probably too much fabric for his daughter. This, right here, was more Ashley’s style. Ashley. Just the thought of her name makes him smile, the sweetness of that ee sound at the end—the sweetness Pam denied their daughter, their sharp, sibilant Alice. Ashley. Cute brunette. A firecracker with her friends, but always sweet to him.

He remembered how Ashley sat with him that one time last year, waiting for Alice to come home from a night out with Eddie. It was just after Pam left him for good. They sat at the bar in the kitchen, he and Ashley, eating sugar-free Jello out of the little single-serving cups that Alice lived on during the summers. They sat there and they talked about the Sox, and she pretended not to notice him checking her out—never called him out as the dirty old man that he most certainly was.

Alice told him that Ashley strips down at the club in Billerica now, now that she’s 18. That makes part of him sad, the part that thinks Ashley could’ve done anything with her life—anything she wanted. But then there’s the part of him that feels certain she’s doing exactly what she wants to do, that Ashley is the kind of girl who always has and always will.

He takes the bikini bottom with him as he leaves Alice’s room, not sure if he is audacious enough to do with it what he is imagining doing with it. The computer in his den is still on, his web browser still opened to the same site. With just enough hesitation to make himself feel better about himself, he heads that way. He clutches the fabric in his fist, trying to remember which color it was that Alice wore all the time, and which color was Ashley’s. As he steps into the den, locking the door behind him, he hopes—prays—that Alice’s color was not purple.