East Dumbstruck is the easternmost settlement of The Free Cities of Nunya. Bordered in the north by The Desert at the Edge of Existence and in the east by the Melancholy Mountains, East Dumbstruck is the town that the people of Nunya—and all of Eden, in fact—use as shorthand for “the middle of nowhere.”

Initially given a far more vulgar name by the quintet of cheeky, polyamorous gay men who set up a trading post on the spot in the early days of expansion, the settlement was rechristened East Dumbstruck during a labor crisis—in an attempt to lure workers with families who didn’t want to explain to their young children what the word after “bum” in the town’s original name meant.

The kids have since figured it out, much to their parents’ chagrin.

Initially founded by five Earthling refugees, the town is now a melting pot of species. You will find dwarves here, living out a peaceful retirement; elven adventurers who use the place as a base of operations for their expeditions into the nearby desert and mountains; and even a kíndallan theater troupe putting on nightly interactive performances in the parlor of the town’s brothel.

As is the case in many of the Free Cities, anarchy is the name of the game. A loose code of ethics and acceptable behavior is posted at the entrance to town, and that’s about it.

The town’s remote location serves as its primary deterrent against those who would wish it harm, but each villager is also equipped with a personal weapon of some kind—even the few children who dwell here. A large bell in the cupola over the central store serves as an alarm to summon the militia.

The town is centered around a bustling trading post run by the founders and their adopted descendants. This center of commerce is bordered on one side by a theater for all ages, and on the other side by the aforementioned brothel. Buildings for various other necessities run along either side of the main street, all up until it ends at the golden arch which serves as the gateway to the desert.

Type
Village
Population
69
Inhabitant Demonym
Dumbstruckers
Location under
Nunya
Owning Organization
The Free Cities of Nunya
Unless otherwise specified, all artwork on this site is by E. Christopher Clark.
Nunya 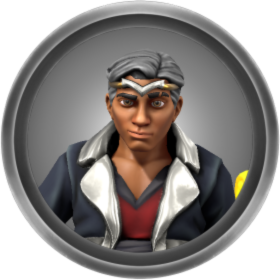 Visit my campaign world at the World of Wizard's Peak.

The town's original name. Love it. XD XD XD   Even the kids have weapons? Yikes.

Yeah, when I wrote that line I was kinda like "Oh, crap, that's something I'm going to have to explore more."