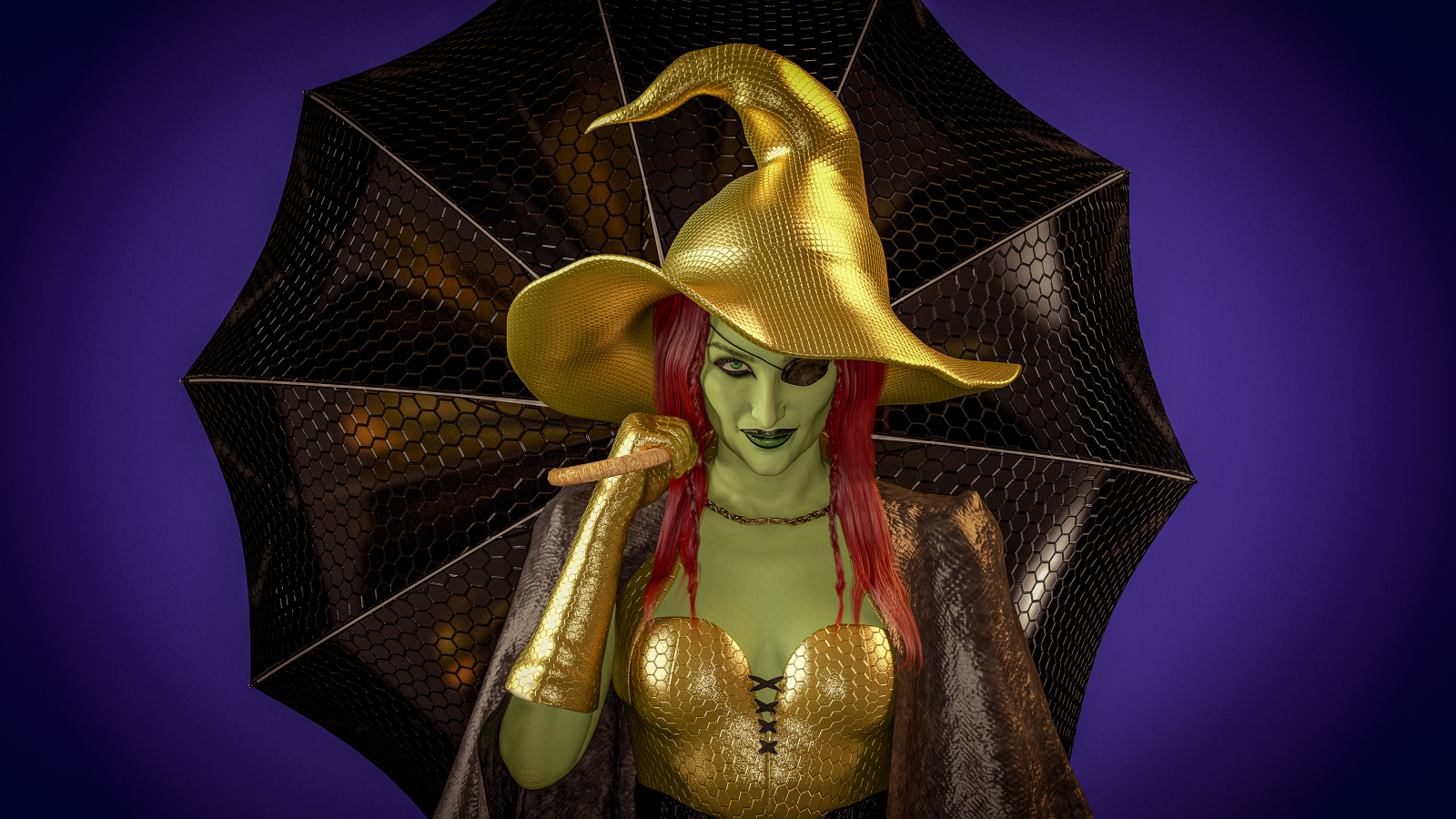 Elavaris the Wicked, Witch of the West, was a tyrannical governor of Winkie Country during the Second Interregnum. A former pirate, she rose to prominence by stealing objects of power from the other Witches of Oz: the cloak of the first Witch of the West, an umbrella belonging to Glinda the Good, and the Golden Cap of Mombí the Wicked.

But she could never manage to outwit The Witch of the East and steal something of hers—and this failure would haunt Elavaris for the rest of her days. Her lust for the Eastern Witch’s Silver Shoes would lead to death, destruction, and a fateful encounter with an Earthling girl called Dorothy Gale.

Born in Wonderland to elven refugees who were brought to Eden by The Calamity, Elavaris Galaeron lived a normal enough childhood—normal enough for a kid growing up in a post-apocalyptic paradise, that is. She read the classics of a dozen different worlds, learned Old Elvish from her parents and Moldése from the kids at school, and was even taught the fundamentals of magic by a priestess of The Faith of the First Mother.

During a sunset cruise on the Sea of Tears, Elavaris’ parents were killed by suicide bomber sent by The Cult of the Lord to terrorize the elven passengers. Thrown into the water by the force of the explosion, Elavaris would have drowned if not for a passing pirate ship and its sympathetic captain.

Seven Years Before the Mast

James Hook and his crew, having set off from Neverland that morning to begin their monthly raids of seacoast cities in Wonderland, took pity on the now teenaged girl. But they were superstitious men, all of them to the last, and they feared having a woman aboard—even a young one. And so, they charted a course back home.

Elavaris was left in the care of the Lost Boys who called the island home—who had called it home long before the buccaneers arrived and rechristened the place the Isle of Pirates. And so, for a few weeks she lived among them in peace. But there was an emptiness now where her heart had been, and she longed to fill that void by doing to others what had been done to her.

She longed to steal, to rob others the way she had been robbed herself. But she was too smart to believe that her thievery would actually fill the empty places inside herself, so she did it out of spite. She did it to hurt.

Using the naïve and lovestruck Lost Boys as her gang, she made the red-skinned kíndallans on the island her regular target. The terrorists who’d killed her family were kíndallan, so she figured these folks had it coming. Yes, it was true that The Cult of the Lord was an extremist group—and that not every kíndallan was a cultist—but Elavaris didn’t care.

The next time James Hook came into port with the Jolly Roger and heard tell of Elavaris’ exploits, he put the crew to a vote. The girl they’d rescued could be of some use to them on the open seas, superstition be damned. And he wanted to know if they agreed.

They acquiesced, and an offer was put out to Elavaris to give up her life of petty larceny and join Hook & Company in their piratical adventures. And it was thus that the seven years Elavaris spent before the mast began.

Seven years of relatively good fortune ended with one disastrously bad day back on the island of Neverland. When the crew of the Jolly Roger lost their captain in The Battle With The Boy Who Wouldn’t Grow Up, they blamed the ruin of their cause on Elavaris. It didn’t matter that Hook had become like a father to her. In fact, that probably made things worse (favoritism, and all that). And it didn’t matter that her “woman’s intuition” (their term, not hers) had brought them countless riches over the years. Every seeming blessing she had brought upon them was a malediction in disguise. The simple fact was that she was a woman, and that women at sea were bad luck.

And speaking of the sea, they had no ship now! It had been stolen by villainous sprite who had bested their beloved captain. And whose fault was that?

“We curse you!” they said to her that afternoon as they left her alone on the beach, and a sailor’s curse is a powerful thing—more powerful still when made by a crew standing as one. “We curse you to never set sail again. If ever you should seek the embrace of the sea—or of any water at all, you filthy bilge rat—may you melt away in despair, in anguish at the very thought of all you’ve done and all you’ve lost.”

“And may you go green with envy!” one of them shouted, “to remind you always of your greed and what it cost.”

And though it didn’t happen at once, because it was just the one of them who had spoken that bit, she did in fact begin to go green the moment the others began to nod along.

And she stayed that way to the end of her days.

Since she didn’t dare travel by sea, Elavaris searched Neverland for ages looking for some other form of transport. Then, while resorting to pillaging the kíndallans again, she heard tell of a magic tree with a twin on the mainland. All she had to do was peel the bark from it and she would find herself back in Wonderland.

Of course the tree was a Hellfire Pine, and it didn’t part lightly with its skin—or with any other part of itself for that matter. But when Elavaris set the damn thing ablaze with a spell she’d learned from the priestesses of the Faith long ago, the tree seemed all too willing to give her what she needed.

When she woke up outside the city of Sorgia hours later, it was to the feeling of raindrops searing the bare skin of her arms. She was able to find cover fast enough to keep from losing a limb, but did lose an eye in the struggle.

And thus the hunt for the best umbrella in existence began.

It was mostly an accident that Elavaris ended up the second-ever Witch of the West. She arrived in Oz after hearing tell of Glinda’s magic parasol, and manuevered her way into the Good Witch’s bed as part of an audition to become a member of the Garde de Glinda. But she never planned on staying in Oz long enough to do any more thieving there. It was a chance encounter with a pack of ambleworts which changed her plans.

Fleeing the monsters across the swamplands of Quadling Country, Elavaris marveled at the way she was able to channel magic through the stolen umbrella. She was going to have change the color of the damn thing the first chance she got—and not just because the bright pink was a dead giveaway when she was trying to hide—but it was the best weapon she’d ever owned. And that got her thinking:

What if the other witches of Oz had weapons just as powerful?

Her next stop was Winkie Country, where she discovered the first Witch of the West ruled mostly by bark and very little by bite. Elavaris could tell that the cloak the Witch wore had some measure of power within it, but had no idea how much. And she had no idea that it might be all the power the Witch had. She had no idea—until, that is, the Witch withered away into a pile of dust the moment Elavaris stole the cloak from her in the dead of night.

Now the de facto governor of the Winkies, she presented herself to a gathering of mayors. And though she did her best to project an aura of invincibility, she sensed she was amongst men and women just waiting to rebel—which was a problem, of course, given that the Winkies were the most technologically advanced tribe of halflings in Oz.

Elavaris looked to the Witches of the North and East now for inspiration, and discovered that Mombí, the Witch of the North, was commander of an army of winged monkeys. Sure, the Witch of the East had pretty silver shoes—which probably did some magical thing or another—but right now, Elavaris needed manpower.

Or monkeypower, to be more precise.

And so, she made her move, and she returned to Winkie Country with a golden hat upon her head and an airborne army at her back. Any Winkie thoughts of revolution were quickly squashed.

Elavaris sat upon her stolen throne, under her stolen umbrella, wearing her stolen hat, and smiled. Then, for many years, she reigned without major incident. Every once in a while, she thought about making a move against the Witch of the East to try and have those shoes for her own. But Munchkinland was so far away now, and the Emerald City stood between here and there—and every plan she came up with seemed too daft to outmanuever the only Witch in Oz it was said that even The Wizard feared—so that final prize would just have to wait.

And it did, until a girl from Kansas dropped her house on top of the Eastern Witch. And that got Elavaris to thinking: how much fight could a little girl put up anyway? Wasn’t now the perfect time to strike, and to get those slippers she’d been longing for? 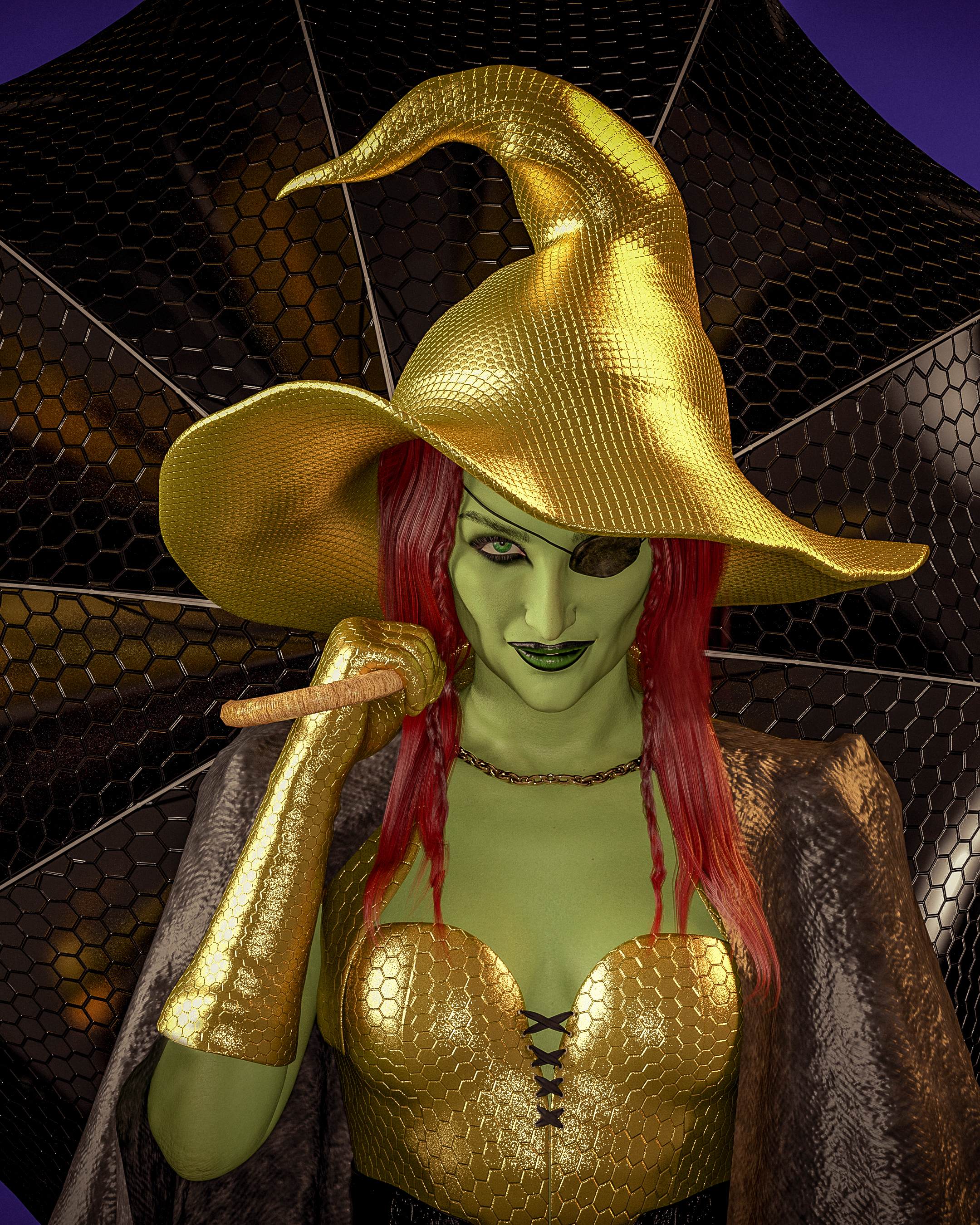 Answering: "a renowned pirate, highwayman or other criminal"
Visit eccbooks's Competition Page Check all other answers to this prompt Competition Homepage

I am living for the way you tie different stories together. Her whole backstory was brilliantly woven together. I Love it :D

Thanks so much! This one was a long time coming. I had the idea for how stuff would get woven together back when the prompts were first announced, but I didn't really know how to get there at first.