The Piano of Death

She struggles with regret and secrets. Forced to relive her past, can she rewrite her future?

Reviewing her actions with the help of a mysterious figure strikingly resembling her dad, she finds herself on trial over her fateful decisions. But as she relives each scene with fresh eyes, she may trigger a chain reaction that could threaten her beloved daughter and uproot their entire family tree.

Can Veronica rise above a lifetime of mistakes and forge a bright new world?

The Piano of Death is the first book in the captivating Stains of Time family saga series. If you like diverse characters, deep emotional drama, and a touch of magical realism, then you’ll love E. Christopher Clark’s brain-bending tale.

Read The Piano of Death to take a soul-searching expedition today!


An excerpt from The Piano of Death

It began with a piano falling from the sky.

Veronica stepped onto the subway platform, guitar case in hand, and tried to shake the image from her mind. But just as the last whispers of the instrument’s final cacophonous chord faded into a gentle hum, she caught sight of something that scared her even more.

It was a man, a salesman. He stood in his suit, leaning against a pillar, his nose in a book. It was Dickens, a collection if she’d read the spine correctly. But he didn’t read, not him. She knew this man. He watched and he listened, but he did not read.

The Salesman looked up at her as she stepped tentatively toward him. He dog-eared the page he was on, then flashed her a wide smile. “Veronica,” he said. “It’s me. It’s—”

“I don’t know you,” she said, turning away, stepping toward the yellow line that separated platform from track.

“That can be fixed,” he said, setting his hands upon her shoulders. “It can all be fixed.”

She thought to shrug him off, so blatant was his bullshit. But he was selling her on it, the way he always did. How many times had the feel of his hands on her shoulders calmed her, comforted her? Whether it was on the swing set, each gentle push of his filling her with the bravery it took to swing higher and faster; or when she’d learned to ride her bike, and his lightest touch could right her most severe wobble; or at the piano, where even the suggestion of his hands nearby could convince her to power through the next measure.

The piano! She gestured toward the exit. “Did you see what happened out there?”

She turned on him, had to see in his eyes if he believed his own spin. “How?” she asked. “It was an accident. How do you avoid having a piano dropped on your head?”

“Stay away from high-priced high rises.”

“Stay away from places where a piano is likely to fall on you from an unsafe height and you are less likely to have a piano fall on your head.” He smiled and ran his hands along her upper arms, giving her shoulders a squeeze as he said, “It’s simple logic, sweetheart.”

She stormed away from him, stared down the tunnel, squinting to see if she could make out any oncoming trains. “Don’t call me that,” she said. “You don’t know me. You don’t have the right.”

“But I do,” he said, his voice echoing through the empty station. “I’ve known you for longer than anyone else in the world, except perhaps your mother and the doctor who delivered you. Veronica,” he said. “Look at me. It’s me. It’s—”

“Shut up,” she said, frightened by the sound of her own voice, the authority it had as it bounced back at her. She looked around, disoriented. Where was everyone? Had the city shut this place down after the piano fell? But, if they had, why hadn’t she and the Salesman been evacuated, too? Something was going on here. “Where am I?” she said. “What is this place?”

“It’s a subway platform,” he said.

“Yes, I get that,” she said, crossing to the map of the subway system, which showed not the Red and Green and Blue lines she was expecting, nor the Orange or the Silver, but instead a Purple line and a Yellow and a Black. She set a finger upon the Yellow Line and followed it to its terminus, a station named Oz. She shook her head. “I get that it’s a subway platform,” she said. “But is this real, or is it all happening inside my head?”

“Ah,” he said. “Well, to quote one of your daughter’s favorite books, ‘Of course it is happening inside your head, but why on earth should that mean that it is not real?’”

She turned and faced him again. “Are you messing with me?” she asked.

He held a hand to his heart, trying to look affronted. “Would I ever?” he said.

“I am not messing with you,” said the Salesman.

Veronica tried to place the quote, but couldn’t. And this surprised her. There were only so many books on their shelf at home, and she had read each of them to her daughter so many times. “What book is that from?” she said. “I don’t recognize it.”

“Of course not,” he said. “It’s what—when did you go to sleep? 1999?—That book hasn’t even been published yet. But once you bring that one home, you’re going to read it to her. Again and again.”

Veronica scoffed. “You’re from the future now, too?” She shook her head, paced. “It’s that Chinese food that I ate that’s causing this, isn’t it? I have a friend who has this theory about crab rangoon being laced with marijuana. I never believed her, but—”

He pulled his book out of his jacket pocket and began to thumb through it. “I can’t remember the damned quotation,” he said. “I nearly flunked out of school because of my English grades. I’m sure I told you that once.”

She sighed, exasperated. “You never told us anything just once, Dad.”

He smiled at the sound of the word, slapping his knee with the book as he did—slapping his knee! who still did that?—and then he let out a laugh. “You said it,” he said. “You called me—”

“The quotation!” said Veronica. “Get on with it.”

He returned to the book, put on his rough approximation of a British accent, and spoke: “I am here tonight to warn you that you have yet a chance and hope of escaping my fate.”

She sighed. “A Christmas Carol?” she said. “So, who are you supposed to be? Marley? My father’s not dead yet.”

He slipped the book back into his jacket pocket. “Allow me some artistic license, if you please.”

“I am all of the ghosts in one,” he said. “So many of you have asked, over the years, to have all of us at once, that we figured we might as well acquiesce.”

“That’s kind of you,” she said, stepping again toward the edge of the platform, looking in both directions for a train out of there. “Now, can we get on with it?” she asked. “I’d like to get some actual rest before Tracy wakes up to bitch at me about the latest wrongs I’ve done her.”

The Salesman slipped up beside her and asked, in almost a whisper, “Do you regret having her, Veronica? Do you often wonder what life would be like if—”

“Hey,” she said. “Wait. Is this A Christmas Carol or It’s a Wonderful Life that I’m dreaming here? It’s not some mashup, is it?”

He strolled down the yellow line, heading toward the far side of the platform. “I was just asking a question,” he called out, over his shoulder.

She stomped after him. “Yeah, a question no parent is allowed to answer out loud,” she said.

He paused at the place where the platform ended and the tunnel began, unlatching a metal gate that locked up a ladder to the tracks below. “Well, you’re not answering it out loud now,” he said. “Are you? This is, as you say, all in your head.”

“I’m still not answering it,” she said.

She watched him climb down, stepping over the tracks, careful to avoid the third rail, and though she knew that she would follow him—that she must—she stood still, holding her ground. She shook her shoulders hard in protest, not wanting to give in, and felt the weight of her guitar case bouncing against her hip for the first time since she’d stepped onto the platform. Had it been there the whole time? She set it down. No use bringing it with her. Serenading him wasn’t going to get her out of this.

“Wait up,” she said, descending the ladder herself and then following him into the darkness. 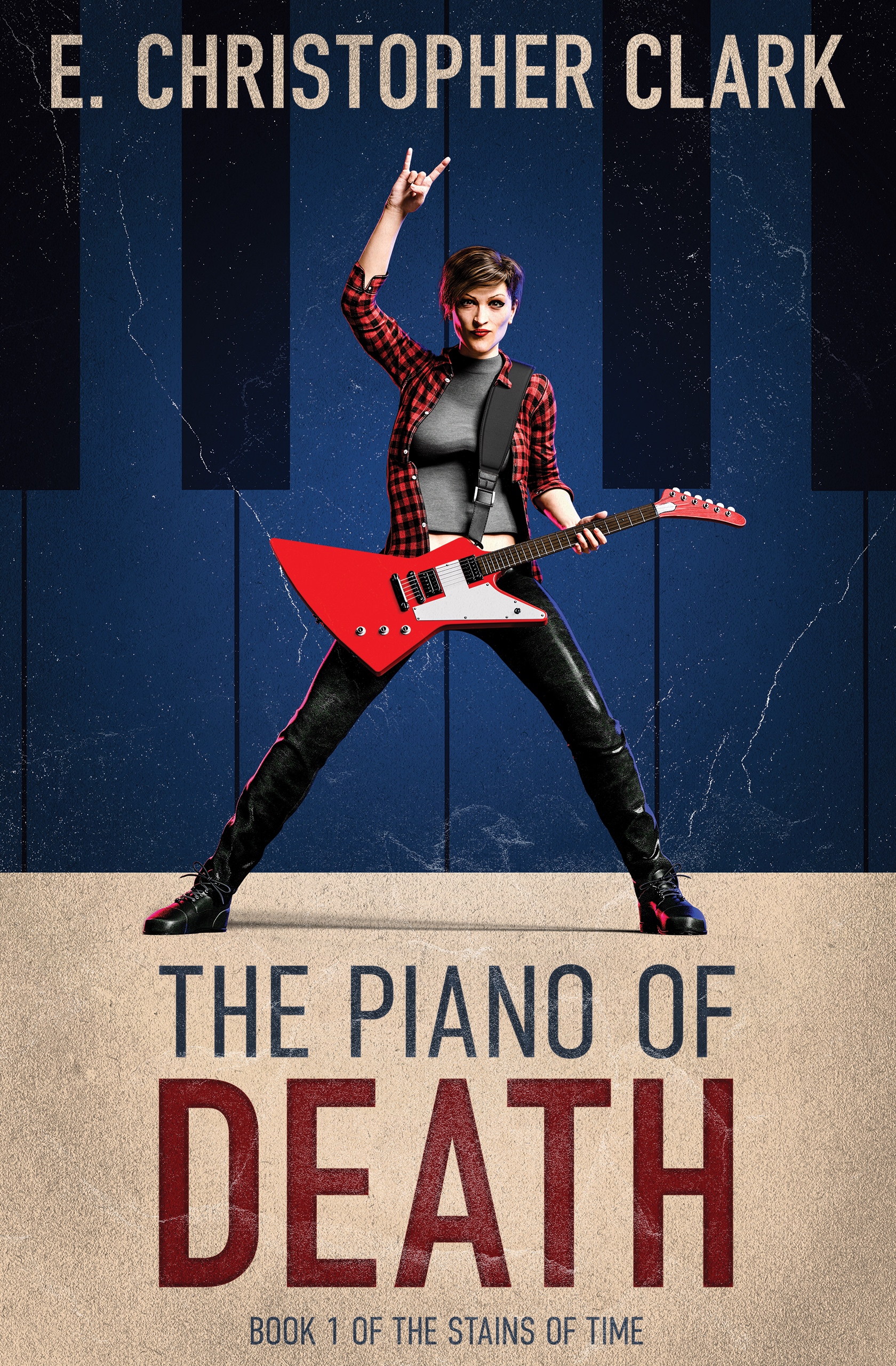