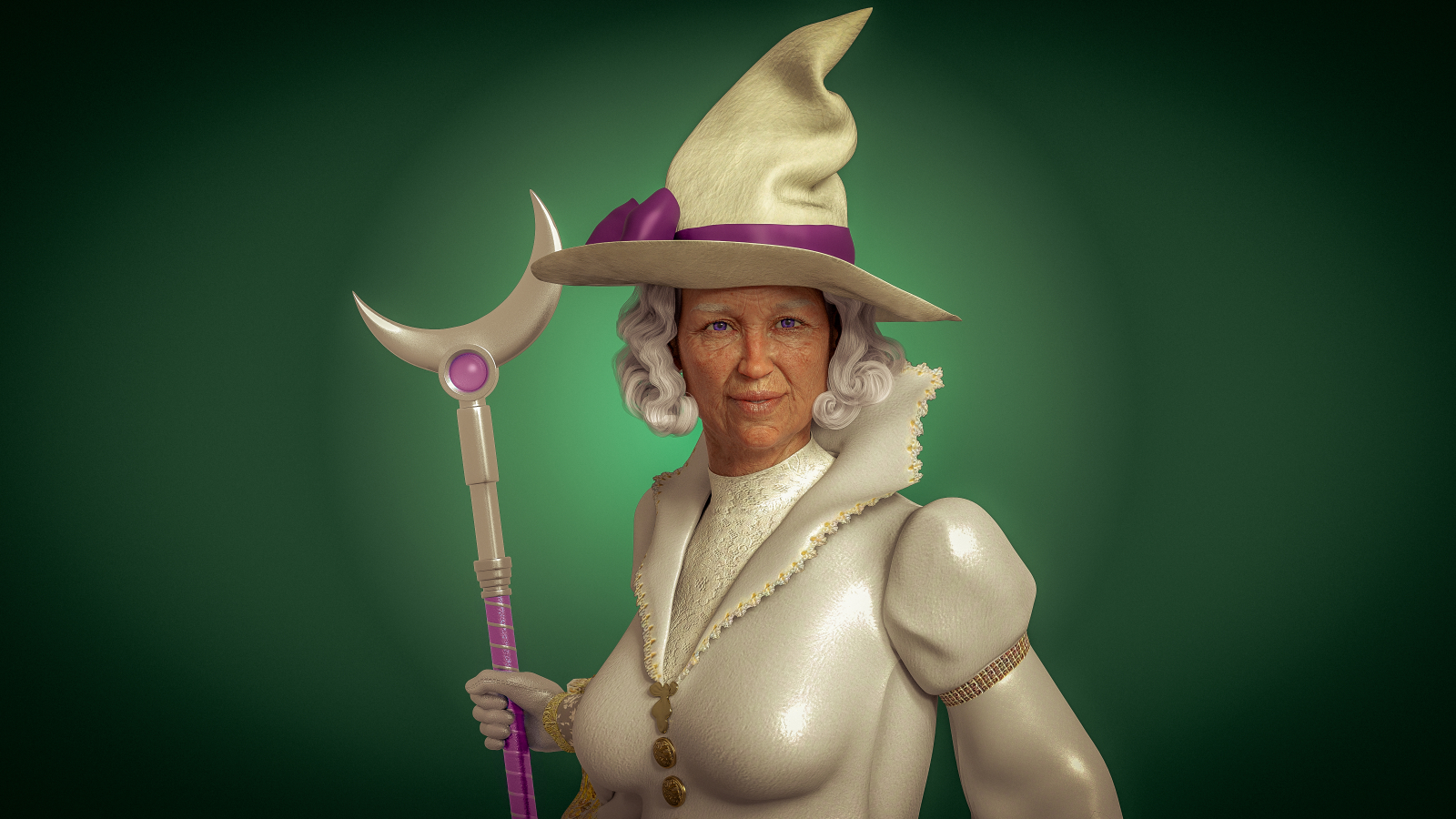 Locasta the Good, Witch of the North, is the elderly governor of Gillikin Country in the land of Oz. She is particularly famous for her defeat of the wicked witch Mombí during the Second Interregnum—a triumph ended which Mombí’s reign as Witch of the North and elevated Locasta to that position.

Born on Gadalla during the Earth-2 iteration of reality, to a quintet of loving parents, Locasta Lanékín grew to be a fearsome warrior. She defended the Kíndallan homeworld against both Elven aggression and the insurrectionist tactics of The Cult of the Lord. And yet, even mighty Locasta was no match for The Calamity.

Stranded in Eden after the end of the world as she knew it, Locasta took refuge in Wonderland. And it was there that she met the man who would change her life: Oscar Diggs.

Diggs, the man who would become The Wizard, was an Earthling refugee who feared what he called the Halfling “Menace.” He’d heard tell of an earlier version of Eden where the halflings kept themselves to one quadrant of paradise and left the rest to the other peoples who’d be stranded here by the Great Apocalypse (Diggs’ term for The Calamity). And together with support from the people of the Wonderlandian territory of Promiseland, Diggs had come up with an idea to put the halflings in their place.

Together with the Promiseland military, four hand-picked witches, and a heaping helping of technology he’d “procured” from the dwarves, Diggs planned to drive the halflings back into the land of Oz—and to keep them there.

“Are you interested?” he asked Locasta, but of course she was not. She had never been one for oppression or tyranny. And she saw nothing the matter with the halflings, who seemed to have taken good care of Eden while the rest of the sapient beings in existence had been off taking another stab at reality.

But Diggs was not one to take “no” for an answer—especially not when he’d heard tell of how fearsome Locasta could be in battle. So that night while Locasta slept, Diggs slipped into her room and slipped his secret weapon upon her head.

The Four Hats and the Birth of Mombí

Stolen from a dwarven milliner, The Four Imperial Hats were originally designed to control the violent tempers of heinous criminals between instances of court-mandated therapy. But Oscar Diggs had other plans for them.

Since he could not get any of the four women he’d targeted to agree to be his lieutenants, he resorted to mind-controlling them instead. And though he slipped a hat onto Locasta’s head himself, he left the rest of the dirty work up to this woman he rechristened Mombí (the Moldése word for “terrors”).

But subjugating the wills of three other women the way she had been subjugated herself—that was the least of the evils Locasta committed while under the sway of Diggs. She led the forced displacements of the Munchkins, Quadlings, Winkies, and Gillikins from the lands of Nunya, Nalké, Wonderland, and The Reek. She terrorized the Gillikins with the army of winged monkeys that Diggs gave her to command. And she murdered any and all rebels who dared to attack her fortress.

Freedom and the Rebirth of Locasta

Locasta’s freedom—and the eventual downfall of Oscar Diggs—finally came at the hands of a most unexpected person. Elavaris Galaeron, a sometime pirate and thief who had usurped the title of Witch of the West, had her eyes on the golden hat of wicked Mombí. She’d intuited—correctly, it turned out—that the power to control Mombí’s army of winged monkeys rest not in Mombí herself, but in the hat she wore. And so, Elavaris descended upon the Fortress of Mombí in the dead of night and stole the golden hat for herself.

In so doing, Elavaris unintentionally freed Locasta from the influence of Oscar Diggs. That was the good news. The bad news was that when Locasta “woke up” from her years spent as Mombí, she remembered everything she had done. And she wept. She wept for a fortnight, locked in her castle, then spent a further fortnight trying to figure out what to do.

The Wicked Witches of the East and South were still in power, and the new Witch of the West—Elavaris—seemed even worse than her predecessor. So the idea of stepping aside entirely seemed out of the question. Either one of the other Witches would fill the vacuum, or Diggs would simply replace her with someone else. He was popular enough now that he might not even have to brainwash the woman in question.

And so, with the help of a fellow Kíndallan she wooed with mountains of Gillikin Gold (since her reputation as Mombí still preceded her), Locasta staged the battle of the century in the streets of Uptown.

Locasta’s fellow Kíndallan had transformed themself into the spitting image of Mombí, and Locasta had transformed herself into a kindly old human woman. And though the crowds of Gillikins at first hid their children’s faces from view, fearing the worst, they soon let the children watch—so that they could witness the triumph of good over evil.

After a drawn-out struggle—long enough to make the Gillikins fall in love with their new champion—“Mombí” yielded and conceded defeat. She ran off into the wilderness, never to be seen again.

Which was sad for Locasta, really, because the face she’d worn as Mombí had been the face she’d been born with. And now, though she’d redeemed herself—and would rule benevolently over the Gillikins for all the years to come, and would try to free the other halflings from their oppressors as best she could—now, Locasta could never be herself again. 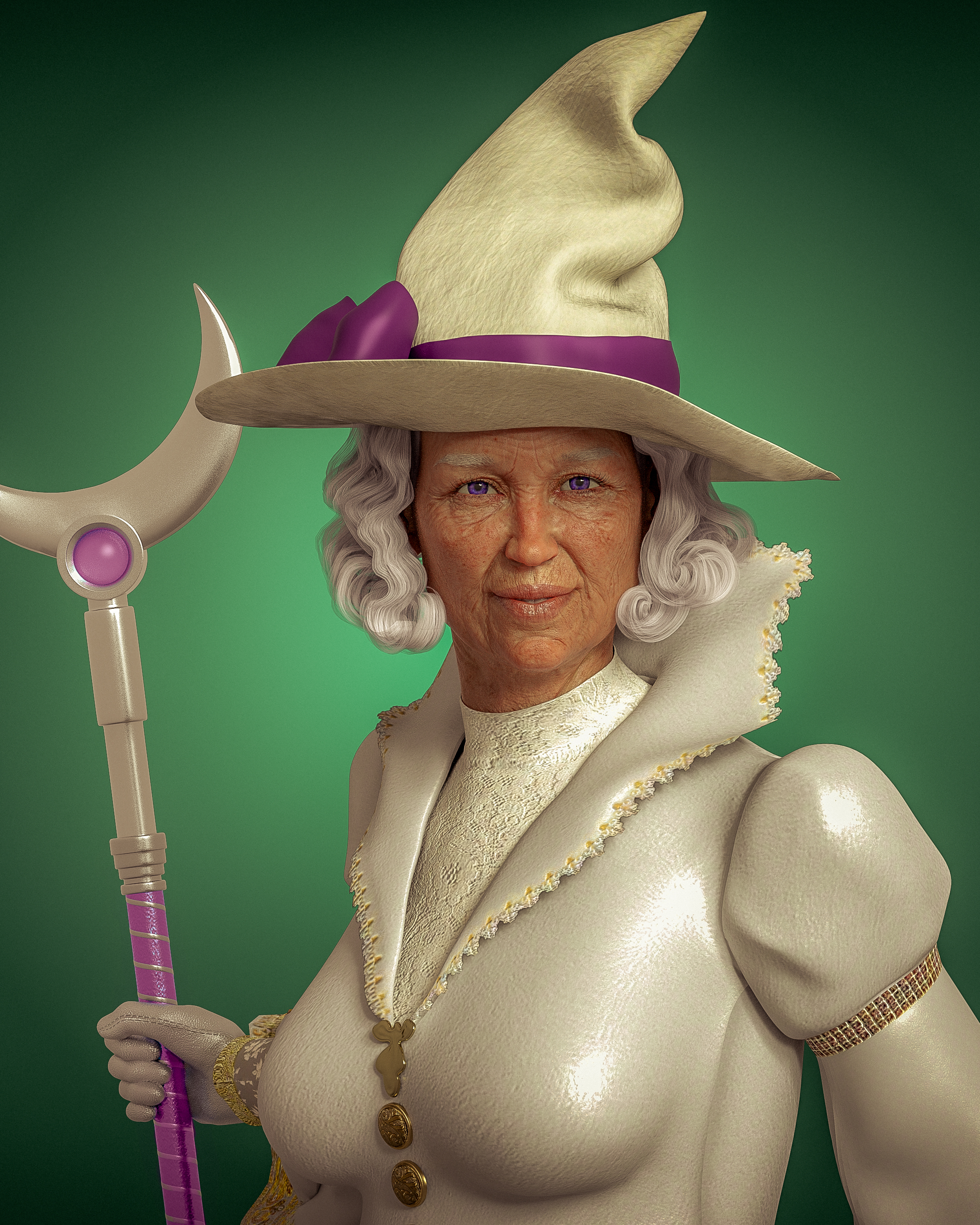 Answering: "a brave hero, who hides a secret past."
Visit eccbooks's Competition Page Check all other answers to this prompt Competition Homepage

That's terrible -but also amazing- maybe one day she could tell them her story and would be allowed to be herself again? Great article :)

Yeah, I hope so. I think that might be a juicy story to write.