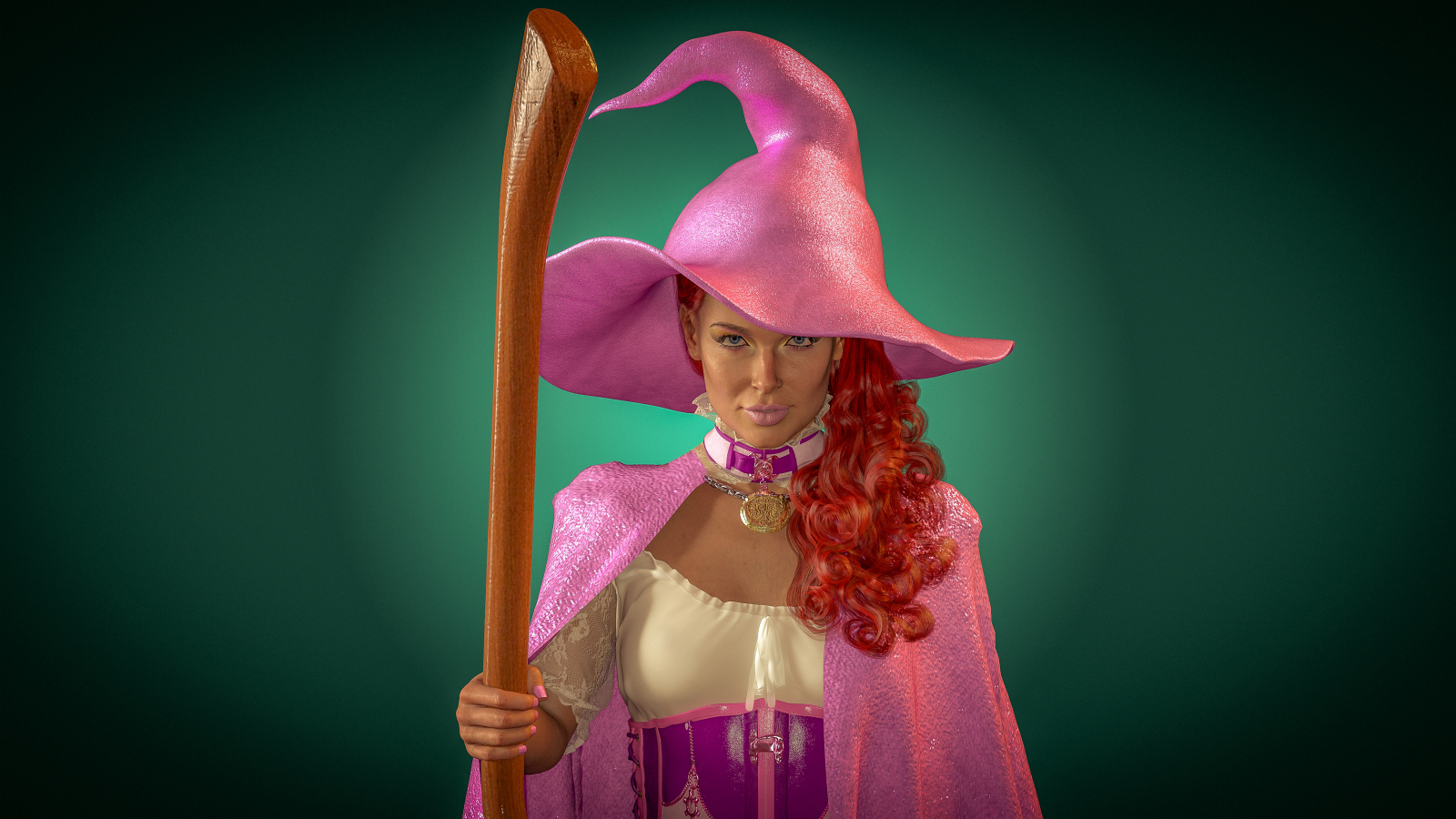 Glinda the Good, Witch of the South, is the immortal, omnisexual governor of Quadling Country. The ideal leader for the amorous Quadlings, Glinda will bed just about anything that moves—and even some things that don’t—so long as there’s enthusiastic and consistent consent.

Though she was born human during the Earth-2 iteration of reality, Gretchen Belinda Hamilton would soon exceed the limits of her species—all thanks to an adolescent battle with undeveloped potential.

The girl who would be Glinda was an affectionate child, and this worried her Fundamentalist parents more than the troubles she had with reading or her inability to focus.

Frustrated by the stories they were hearing of her hugging boys in kindergarten, Glinda’s parents swiftly transferred her to an all-girls school—only to be flustered a few years later when she was reprimanded for kissing girls on the swings. Eventually they opted to home-school her and keep her away from other children altogether, until they could drive home the point that she was squandering her “potential.”

But it was a point that Glinda never quite got.

Her parents told her that she could be “a shining example of God’s grace on Earth”—if only she would try harder. But wasn’t God all about love, she asked them. And if God was all about love, then what was wrong with her loving people? What had been wrong about hugging a boy who was crying over a skinned knee? What had been so wrong about kissing a girl who trusted Glinda enough to ask if she’d like to see what all the fuss was about? Didn’t God say to “love thy neighbor”? Wasn’t that what she was doing?!

In the early- to mid-90s, when Glinda caught wind of something called the Internet, she began sneaking out of the house to use one of the town library’s terminals. It was there, through the magic of electronic bulletin boards and chat rooms, that she met the group who would change her life.

A coven of The Faith of the First Mother gathered weekly just two towns away—with several members who had been raised by Fundamentalist parents themselves—and they offered to take Glinda in. And so, as soon as she turned 18, she ran off to join them.

Glinda’s First Touch ceremony, a special occasion for any priestess, was especially monumental for the sexually repressed young woman. The potential which exploded out of her in the moment of her first climax—it reshaped her to her core. And though it made her instantly the most powerful member of her coven, it also saddled her—like all other “Potents”—with an insatiable hunger for more.

Of course, Glinda lived in the Clarkwoods Literary Universe, a place where reality reboots on occasion. And so it wasn’t long before she found herself in the midst of a universe-ending Calamity, and therefore expelled from the world as she knew it.

She was fished out of The River Without End by Quadling mariners, and brought back to live among them during the early days of the Second Interregnum. Amongst a whole country of people who thought and acted like her in matters of love, Glinda finally felt at home and at peace. Free to do whatever she wanted to do—and whoever she wanted, as well.

The cornucopia of pleasures awaiting Glinda in Oz and the other lands of Eden were bountiful—and she drank long and deep from every varietal she could find.

She made rapturous love with elves, kíndallans, and dwarves—not to mention the many halflings she called neighbors. But she didn’t stop there. Glinda bedded the Big Bad Wolf, made the three li’l pigs squeal, and hopped from mattress to mattress in the House of the Three Bears. One night with her slaked Zeus’ legendary lust, two nights put an end to the ancient grudge between the houses of Montague and Capulet, and three nights was all it took to make an honest man out of an aged Pinocchio.

Which didn’t last long, of course, since Glinda told him he was a lot more fun when he lied.

As word spread of her prowess, she was from time to time called upon to use her talents for the good of all Eden. Glinda once “rode” an angry meteorite right off course, saving the city of Newest Orleans from obliteration. More than once, she had productive social intercourse with notorious highwaymen and pirates—only to seal new deals of friendship with delightful sexual intercourse immediately thereafter. And in the most notorious act of good will from her early days in paradise, she so satisfied the hungers of an eldritch beast which threatened to rise from the briny deep to devour all Eden—she so satisfied this Lovecraftian thing, that it has baked her three dozen cookies (one for each tentacle) every Valentine’s Day since.

There is no person or people she is more devoted to, however, than the beloved Quadlings—who had rescued her from certain death when she battled with the killer currents of the River Without End. And so, when the Quadlings begged Glinda to challenge the first Witch of the South for the governorship of their lands, she could not and would not pass up the opportunity to repay their kindness.

At first, Glinda thought to propose free and fair elections to The Wizard. But the day she appeared in the Emerald City to plead her case, the Wicked Witch challenged her to a magical duel for the right to rule.

It was a hard-fought contest, but Glinda did eventually prevail. And in so doing, she was named the second-ever Witch of the South—a title she still holds to this day.

To thank her, the Quadlings gave to their new, benevolent ruler the gift of a Ríxtahn. They had heard stories that Potents like Glinda could be cured, at least partially, by bonding with one of these beautiful symbiotic creatures. And sure enough, the stories turned out to be true. For though Glinda’s lust for life—and her lust for lifeforms—didn’t diminish, she no longer felt exhausted on the days she chose not to have sex. She no longer made love out of necessity. It was all about pleasure now, now that her battle with the poison of potential was over.

She thanked her Ríxtahn by taking it to bed, of course. And she’s worn it every day since—as a corset, a bathing suit, a simple t-shirt, or whatever else the Ríxtahn feels like being that day. 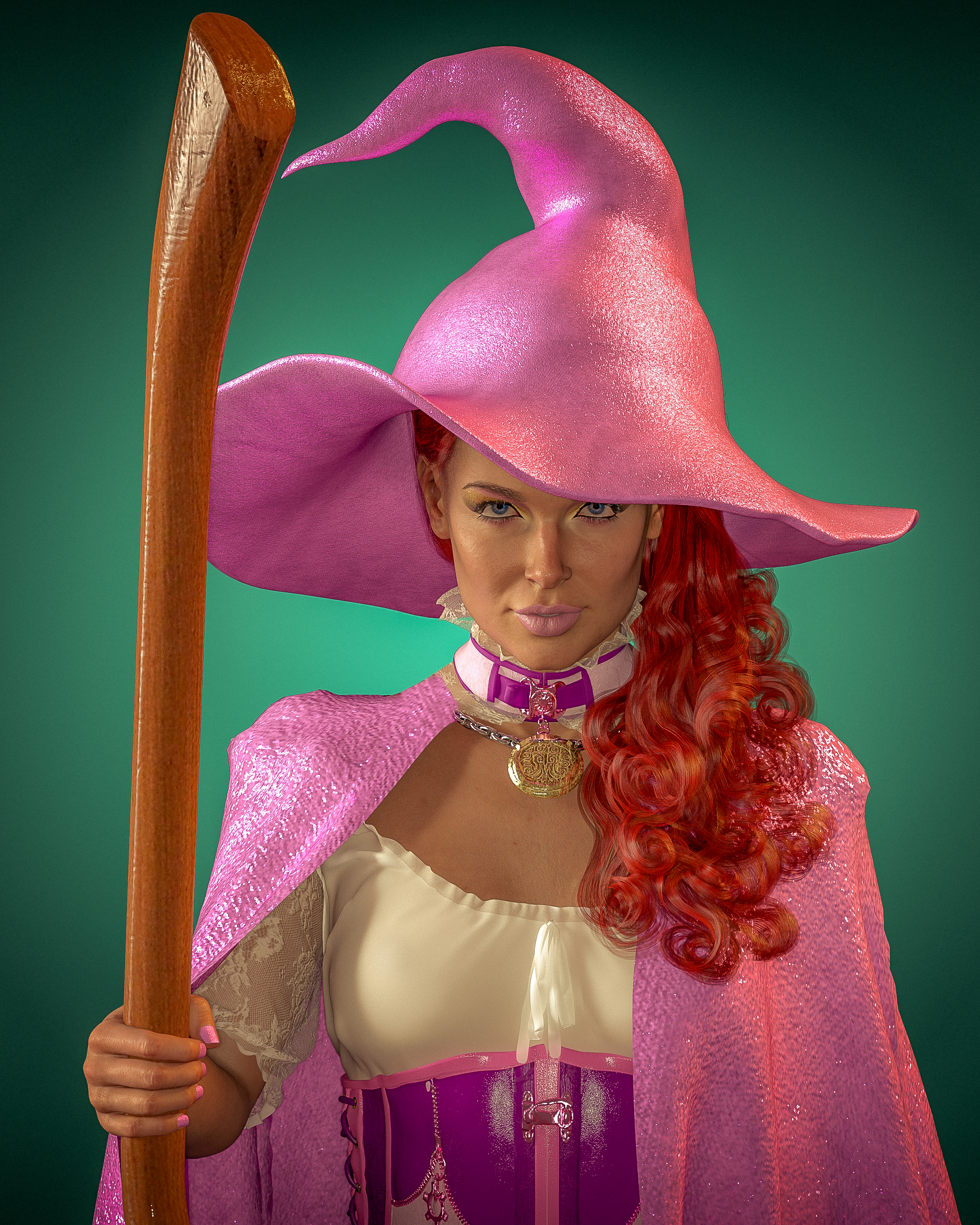 Answering: "a Romancer, Paramour, or other amorous individual"
Visit eccbooks's Competition Page Check all other answers to this prompt Competition Homepage

Yay! She was kinda meant to be awe-inspiring, so I take this as a great compliment.

As you should! :D

If she even wants to sleep with a lovecraftian being than she really is keen to have sex with every moving thing :p Fun read!

Thanks! I now really want to do an art piece where the Lovecraftian being is bringing her the cookies on Valentine's Day—with whatever would amount to a smile on its face.

Amazing work! I especially enjoy her reply to what 'love thy neighbor' means.

Thank you so much! I really loved writing that part.